Ritchie has retired from the show ring and fathered two beautiful litters with Reba (AKC CH Ozark sun Somebody Fancy of Sunsation). He’s enjoying being a regular dog and keeps a close eye on the yard. 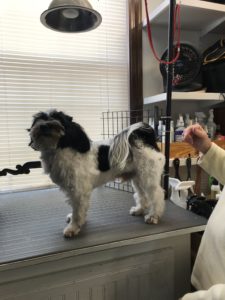 Final major and champions defeated toward GCH.  At a large special entry in Atlanta, feb 2018 Outstanding weekend at the Cotton Cluster in Priceville, AL.  Ritchie took Winner’s Dog and Best of Winner’s on two days for 4 point majors each, finishing his championship and then got a 5 point major when he went in with the big boys on Saturday and took Select Dog!!!! So 5 points toward his GCH as well as one major and one show with champions defeated.  Very proud of my little bred by boy – he went eight shows in a row taking points!!! Ritchie off to a good start!! 6 points and 1 major in four shows!! Ritchie is a boy from our last litter of 5 boys from mom Ginger and dad Georgie. He’s a little over a year now and I’ve just started showing him. Three shows – three points!!! Very proud of how he’s doing.